I was fascinated by Versailles and the history of the kings. Madame de Pompadour was my favourite. When I bought my place in Paris, I did some research on the building’s origins, and guess what: in the 18th century this hôtel particulier belonged to the Bishop of Beauvais who rented it to Madame de Pompadour’s father. She even lived here as a child. And that’s how I ended up in the house of this woman I loved. Azzedine Alaïa

The secret Alchemy of a collection - video Ilvio gallo

In 1987 Azzedine Alaïa bought the former “hôtel des évêques de Beauvais” in the Marais where he moved with Christoph von Weyhe in 1991. It was to be both his new work place and home. It was from here that he received the inspiration for his first collection in the new atelier, Summer 1992.

During the renovation work, Alaïa was surprised to discover frescos on the walls. Driven by his curiosity, he wanted to learn everything he could about these works of art. His patient research was rewarded. Alaia discovered that a young girl, Jeanne Antoinette Poisson, had once lived in his building. The young girl would later take the name of Madame de Pompadour. Alaïa liked to think that it was here where she would have studied with the best teachers of the day and been taught dancing, drawing, painting, engraving, theatre, and all the arts that opened for her the path to the court of Versailles.
Pompadour was not born into the aristocracy, but her power and influence on the Kingdom of France was legendary. These shadows of Pompadour’s presence expanded Alaïa’s imagination. Pompadour’s authority and grace in all matters of beauty and style became for Alaïa the symbol of the freedom of what was truly feminine.

He started to work on his Summer collection with these images planted in his mind; incorporating elements reminiscent of XVIII century gowns and corsets,  with the hint of a pannier,all in delicate “broderie anglaise”.
But the frills and lace were in contemporary Alaia style, with closely fitted body silhouettes. Shirts were gathered up at the back, and were short, which made them easy to move around in; practical, with a nod to the stripes of more masculine shirts and jackets. Masculine fashion lines also appeared in short jackets and long sleeves, as well as redingotes and light coats, halfway between a cape and an overcoat. And he added humorous and ironical trompe l’oeil “mon coeur est à papa”, while embroidered and printed floral motifs decorated the stretch dresses. The 1992 Summer collection was the largest Azzedine Alaïa had ever presented with over 115 outfits. Months and months of preparation went into the conception and execution of each piece. Always personally crafted by him, his creative work was done in the solitude of his new home, standing at the table in his studio during long nights spent cutting and sewing. All of his emotional forces were joined and grew into this collection where his fascination with Madam Pompadour met his fascination with the power and freedom of a truly feminine woman.

The exhibition is accompanied by a book “The Secret Alchemy of a Collection” published by Assouline.
In 1991 Prosper Assouline was given an entrée into the intensely charged atmosphere of the working studio of Azzedine Alaïa. Never before had an artist allowed the secrets of his atelier to be so fully documented. The result was this book, a reflection on the creative chaos and the fragile and wonderful craziness of the inner workings of the Alaïa Summer 1992 collection. 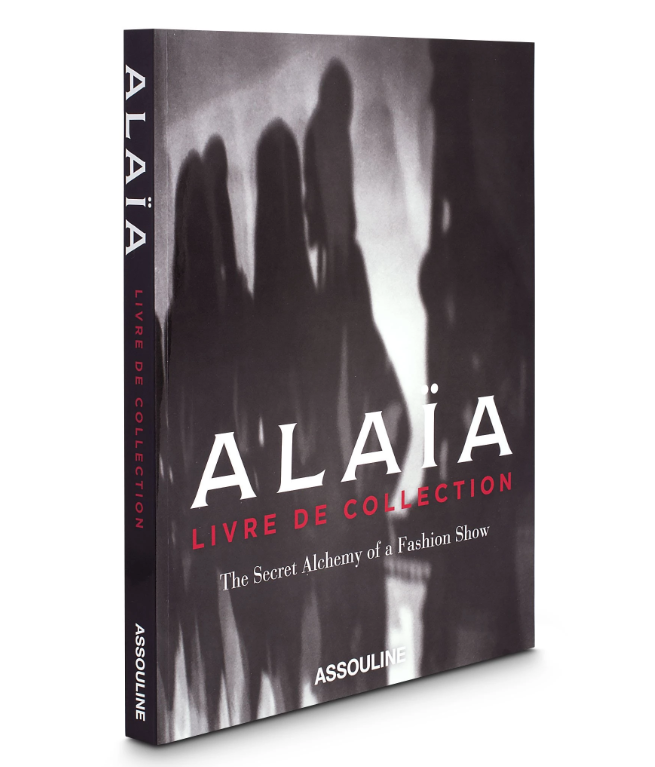 The secret alchemy of a collection