When I visited this place, I liked that it has an industrial aspect. I went for it. There will be everything inside, it’s a very large space but it’s going to be occupied, all of it, every last bit. Azzedine Alaïa 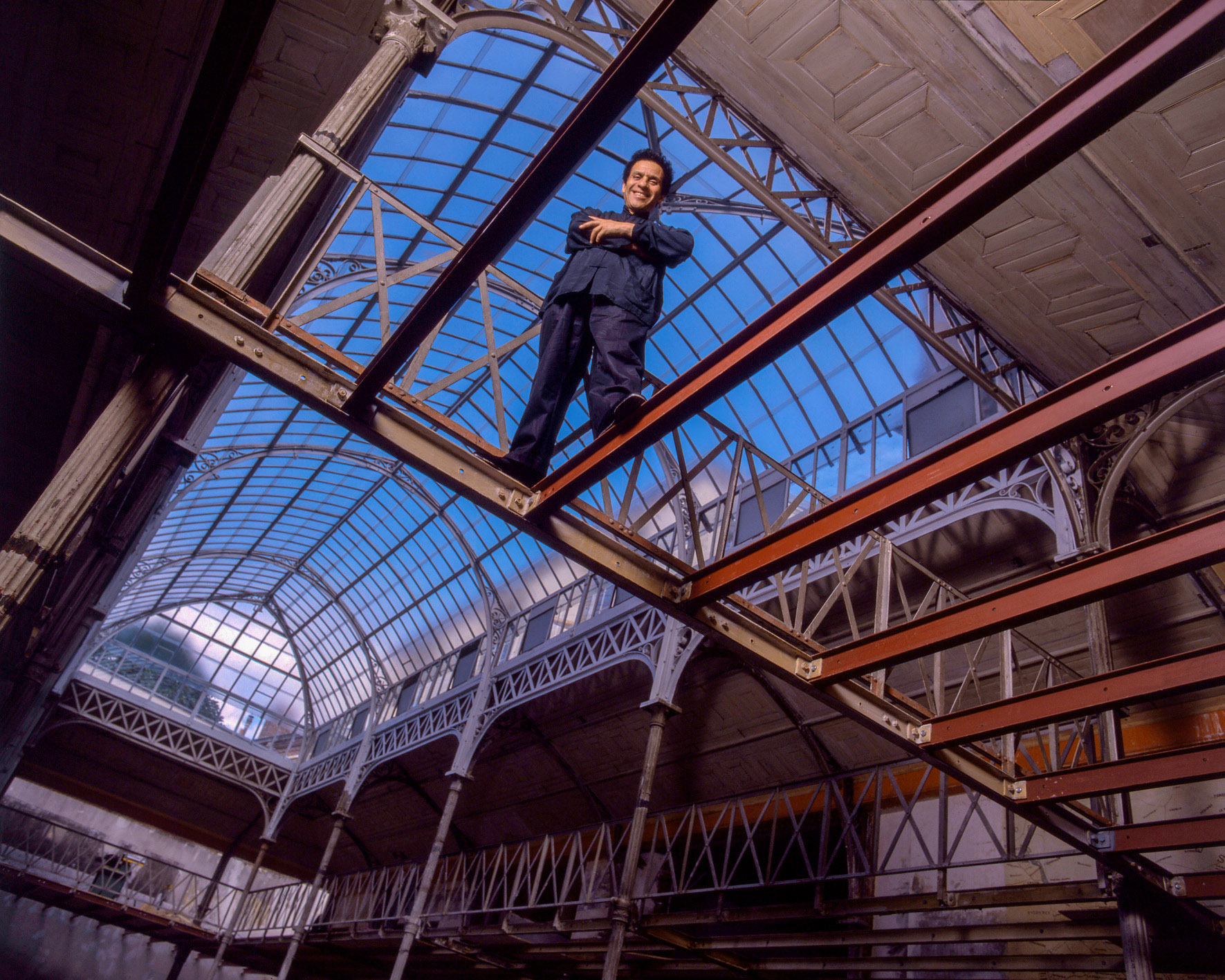 In 1987, Azzedine Alaïa bought a group of buildings in the Marais neighborhood in Paris.

The ensemble consists of a number of vast spaces, all connected to one another, and situated between the rue de la Verrerie and the rue de Moussy. At 18 rue de le Verrerie, in the great glass-roofed hall which had been transformed into an industrial workshop in the 19th century, then a warehouse for the “Bazar de l’Hôtel de Ville” department store, Azzedine Alaïa would create his home and place of work.

Renovation works uncovered frescos on the walls of large scale geographical maps of faraway regions hand-painted directly on to the plaster of the great glass-roofed hall, built according to the plans of the architect Harouard, remains from a period at the end of the 19th century during which the building housed a charitable restaurant. This restaurant had been a social initiative of François-Xavier Ruel, founder of the department store “Bazar de l’Hôtel de Ville” (1854), with the aim of providing meals to the poorest families for a modest sum.

Driven by his tireless curiosity, Azzedine Alaïa also discovered that at 7 rue de Moussy where once stood “l’Hôtel des Évêques de Beauvais”, a young girl, Jeanne Antoinette Poisson, who would later become the “marquise de Pompadour”, favorite courtisane of Louis XV, had received within these very walls her education in basic academic subjects aswell in what was known as the “ornamental branches”.There she learned skills that would enable the young woman to be received at court, despite not having been born into the aristocracy, and there, thanks to her education and beauty, she would exerce an influence that remains unparalleled throughout the history of the arts. The “marquise de Pompadour” was for Azzedine Alaïa one of the great historical figures, the beauty of a confident elegance, the modern woman. Throughout his life he was fascinated by the extraordinary life of this woman from humble beginnings. She was for him a constant source of inspiration and admiration.

The building renovations initiated by Monsieur Alaïa would take over five years to complete.

In 1990 Azzedine Alaïa left his Hôtel Particulier on the rue du Parc Royal and moved with Christoph von Weyhe into the new space.

The architectural ensemble houses Azzedine Alaïa’s apartment and creative studio, the ateliers, the store at 7 rue de Moussy, the atelier of Christoph von Weyhe, and the famous kitchen, host to a great many encounters, gatherings and exchanges of ideas.

Here Alaïa created the Summer 1992 collection, one of the first to be created in this new space. The collection references the marquise de Pompadour and the Court of Versailles.I t is also one of the couturier’s largest and most emblematic collections.

At 18 rue de la Verrerie, hommage is continually paid to artists and designers, with works permanently on display, for example “le Sein” by César takes pride of place in the courtyard, in the bookshop and the kitchen, pieces by Le Corbusier, Jean Prouvé, Jean Royère, Serge Mouille, Harry Bertoia and Gino Sarfati interact with one another, lights by Marc Newson adorn the ceilings of the future museum,and the artist Julian Schnabel is ever present throughout the space in his paintings and portraits of Azzedine Alaïa, a testimony of their great friendship.