There is nothing more beautiful and noble than to stand still and look up to the sky. Azzedine Alaïa

Perched on top of a hill, covered in pine and eucalyptus trees, lies Sidi Bou Saïd: a small village composed of enviously beautiful white houses with blue doors. Its picturesque view overlooks the entire Mediterranean, as well as the ancient city of Carthage. It is here, at the summit of this hill, that Azzedine Alaïa chose to construct his home in 1986 to connect once again back to his roots.

Azzedine Alaïa knows Sidi Bou Saïd well. During each visit to the village, he would stay with his close friend Latifah – who he met in the 1950’s at the l’école des beaux-arts in Tunis – and her husband Jalel Ben Abdallah, the well-known Tunisian painter.

It is in Sidi Bou Saïd that Alaïa rediscovered the Tunisia dearest to his heart, as well as the place which served as inspiration to many of his collections redolent of the Mediterranean. The silhouettes used in the collections oftentimes mimic the antique columns of Carthage and the Moorish architecture, while the motifs recall arabesque figures, Arabic calligraphy and moucharaby structures. The shirt dresses are a nod to Tunisian dress, while the white blouses are reminiscent of the ensembles worn by the Sisters of Notre-Dame-de Sion, whom Alaïa would have often encountered in Tunis throughout his adolescence. 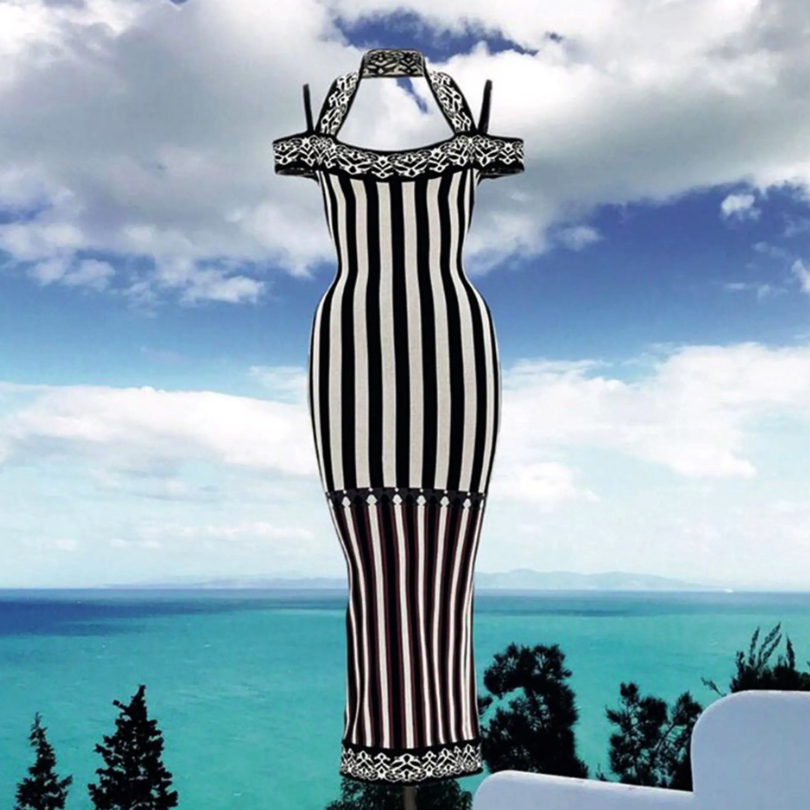 “Azzedine said there was a piece of abandoned land attached to Latifa and Jalel’s property. It held a small building in ruin, overlooking the ocean, where a farmer had left his donkey to graze. Azzedine had bought the land for constructing his new home, but Sidi Bou Saïd is attached to city of Carthage, which was recently classified as a world heritage site by UNESCO (1979). This classification made any new construction project very difficult… but the plans for the home, which were drawn by the famous contemporary Tunisian painter Jalel Ben Abdallah, convinced everyone that the project should go forth.”

The interior garden, hidden from view, offsets the white austerity of the walls with its luxurious vegetation and vibrant colors: flamboyant bougainvillea, jasmine flowers, and cypress bloom alongside the date palms and pines that rise high above the flat roofs.

Throughout the years, Azzedine Alaïa would rarely spend time at the property, and would often stay with his friend Latifa when visiting the village. Because of this, he never had the time to properly furnish the home, which resulted in its minimal interior decoration.

Since Azzedine Alaïa’s passing, the Azzedine Alaïa Foundation has named the home “Dar Alaïa” and the location is used to display exhibitions that celebrate the memory of the designer.

In 2018 “Azzedine Alaïa, The Mediterranean”, was an homage to the designer’s Tunisian origins and how they inspired his collections. The installation displayed a selection of twelve robes chosen from his Spring 1992 Collection. In 2019, the Foundation exhibited,“Looking for Oum Kulthum”, a film created by the Iranian artist Shirin Neshat. Azzedine Alaïa was a great admirer of the singer and Egyptian actress Oum Kulthum, whom he had discovered as a young boy at the Ciné Soir film screenings in Tunis.

In conjunction with the film “Looking for Oum Kulthum”, the Foundation held the exhibition titled “Black Dresses,”which featured a couture dress that Azzedine Alaïa had made for Latifa alongside black and white dresses created by young Tunisian designers.

In some places, there is no real measure of time, only day and night.