With Louise de Vilmorin there were many things to learn, and intellectually it was marvellous. She would pick up a book and read it to me when we’d go off travelling together. Azzedine Alaïa 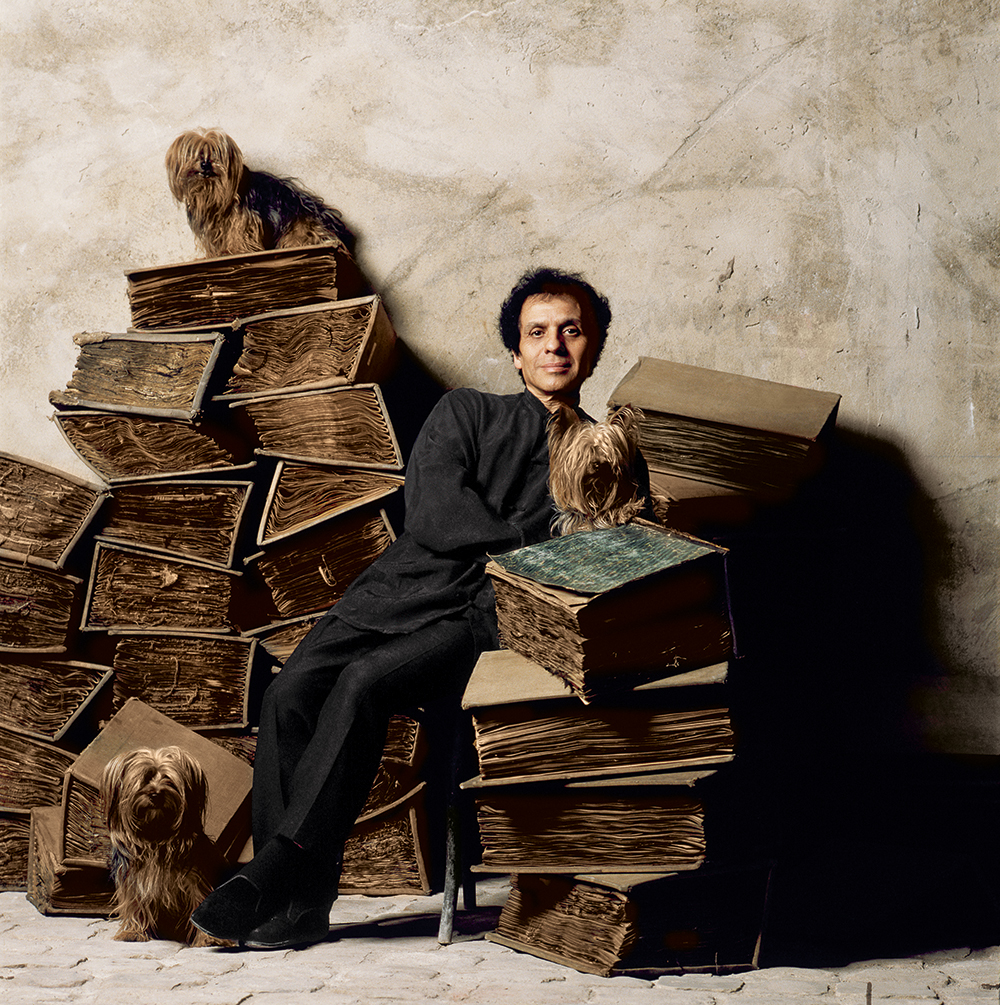 Azzedine Alaïa had a real passion for books, and he collected them in the same way that he collected works of art and the garments of the great couturiers that he admired.

Since then, a number of other books have followed, on subjects as varied as art, fashion, and photography, as well as the catalogues accompanying each exhibition in collaboration with with major publishers and his own publishing house.

I accumulate books and I don’t have the time to read them. I dream of hiring someone to read to me. That would be truly the meaning of luxury, to have my own reader. 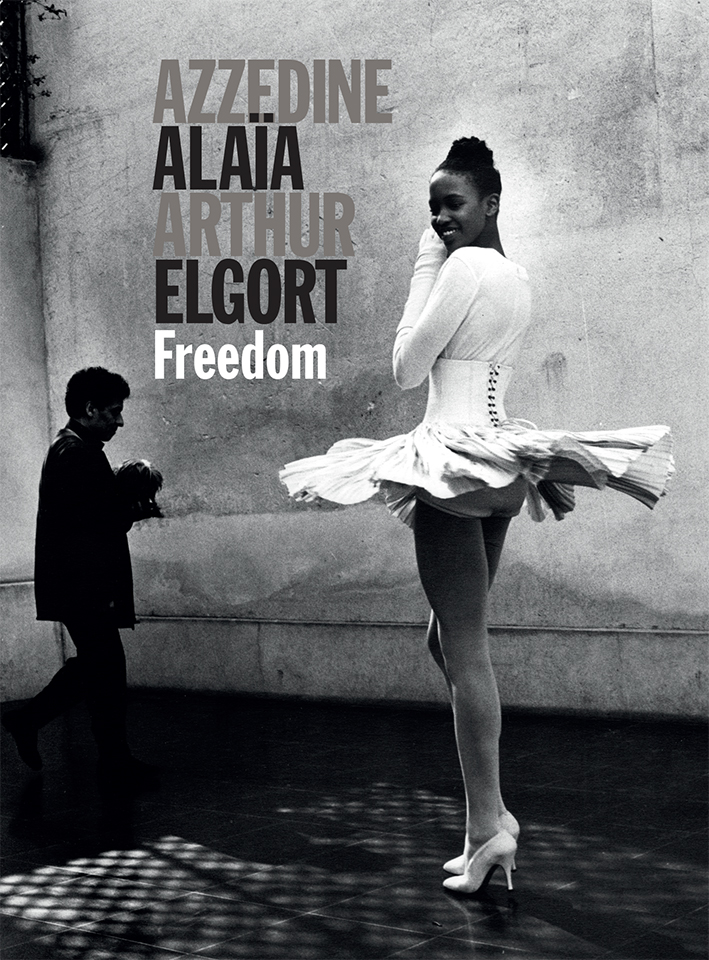 Azzedine Alaïa and Arthur Elgort initiated a collaboration considered as a frontispiece for the 1980s. Neither understood the other perfectly – Alaïa was not proficient in English and Elgort did not speak French – but they clearly established a strong rapport. Playfulness, intuition, and spontaneity were at work here. Azzedine literally entered the frame of the photograph while the joyful models leapt about enthusiastically, and it is easy to imagine the photographer smiling behind the camera. Elgort and Alaïa did not have to choose between the two, and as time passed, it became clear that the young man with unbridled talent who moved so deftly from one to the other would mark a new chapter in fashion photography, demystifying couture creations to bring them within everyone’s reach. As they worked together on magazine shoots, Elgort and Alaïa shared a dislike for superfluous sets and props, which got in the way of Elgort’s photographic vision and were like needless cosmetics for Alaïa’s sculptural creations. The models captured by Elgort’s lens and dressed by Alaïa became the ambassadors for new forms of expression where two artistic approaches came together but never clashed. Linda Spierings, Frederique Van der Wal, Naomi Campbell, Christy Turlington, Cindy Crawford, Linda Evangelista, and Stephanie Seymour were like divinities dancing on the frieze created by Alaïa and Elgort.

This book commemorates the long collaboration between Alaïa and Elgort. Many of the images produced by the duo are considered classics, emblematic of the late 20th century. This volume reproduces approximately 200 of these dynamic, playful photographs, many of which feature Alaïa himself.

The genesis of a style 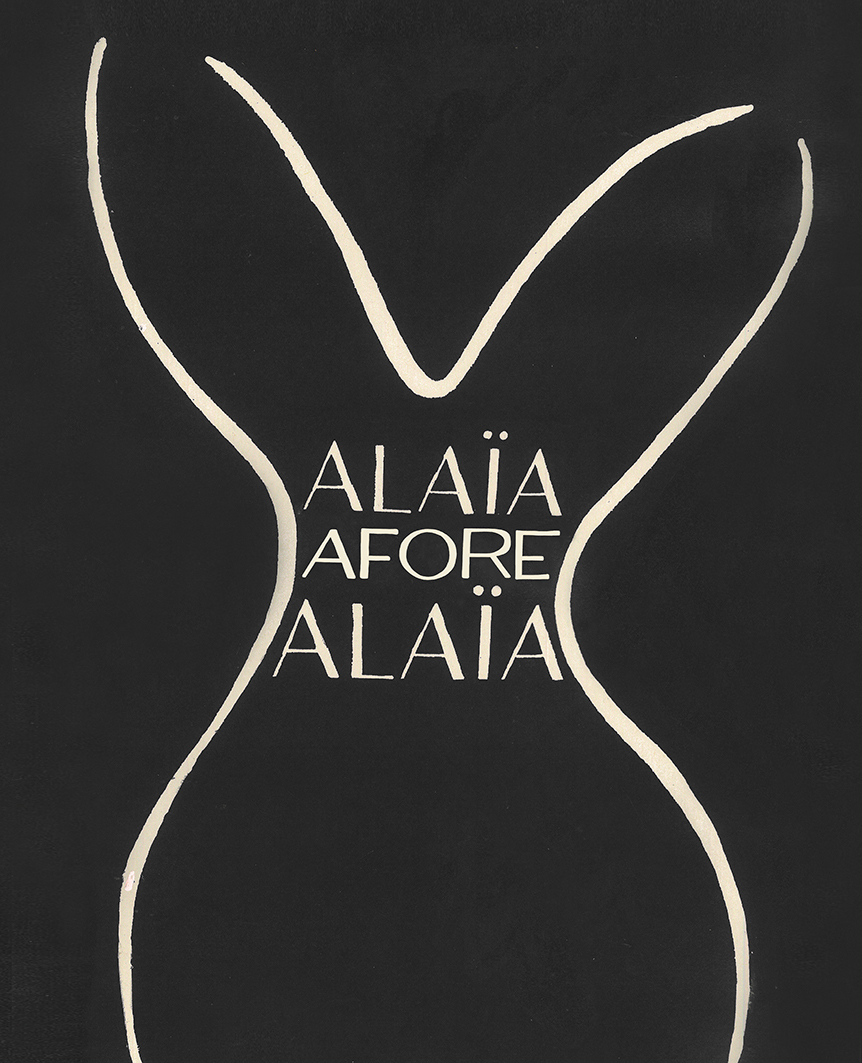 Unveiling the history of Azzedine Alaïa before his milestone 1982 show, this book explores the growth of one of fashion’s most enigmatic icons. Azzedine Alaïa (1935–2017) was regarded as a genius of contemporary fashion. Edited by his closest friend, Carla Sozzani, this new volume explores Alaïa’s early life and career, from his native Tunisia and 1956 arrival in Paris, to his breakthrough 1982 New York show. From apprenticeships to encounters with Paris’s artistic, literary, and society crowds, this book pays homage to Alaïa’s creative evolution. This unique volume delves into rare archival materials, private photographs, and prominent publications to powerfully illustrate the fascinating journey of a fashion legend. Written by Laurence Benaïm, fashion expert, with texts by Olivier Saillard, French historian specializing in fashion and director of the Azzedine Alaïa Foundation and Carla Sozzani, co-founder and president of the Azzedine Alaïa Foundation.

under the direction of Benjamin Lindbergh and Olivier Saillard

Peter Lindbergh and Azzedine Alaïa, the photographer and the couturier, were unitedby their love of black, a love that they would cultivate alike, be it in silver print or in solidcolor garments. This book celebrates the two great talents who made history in
photography and in fashion. 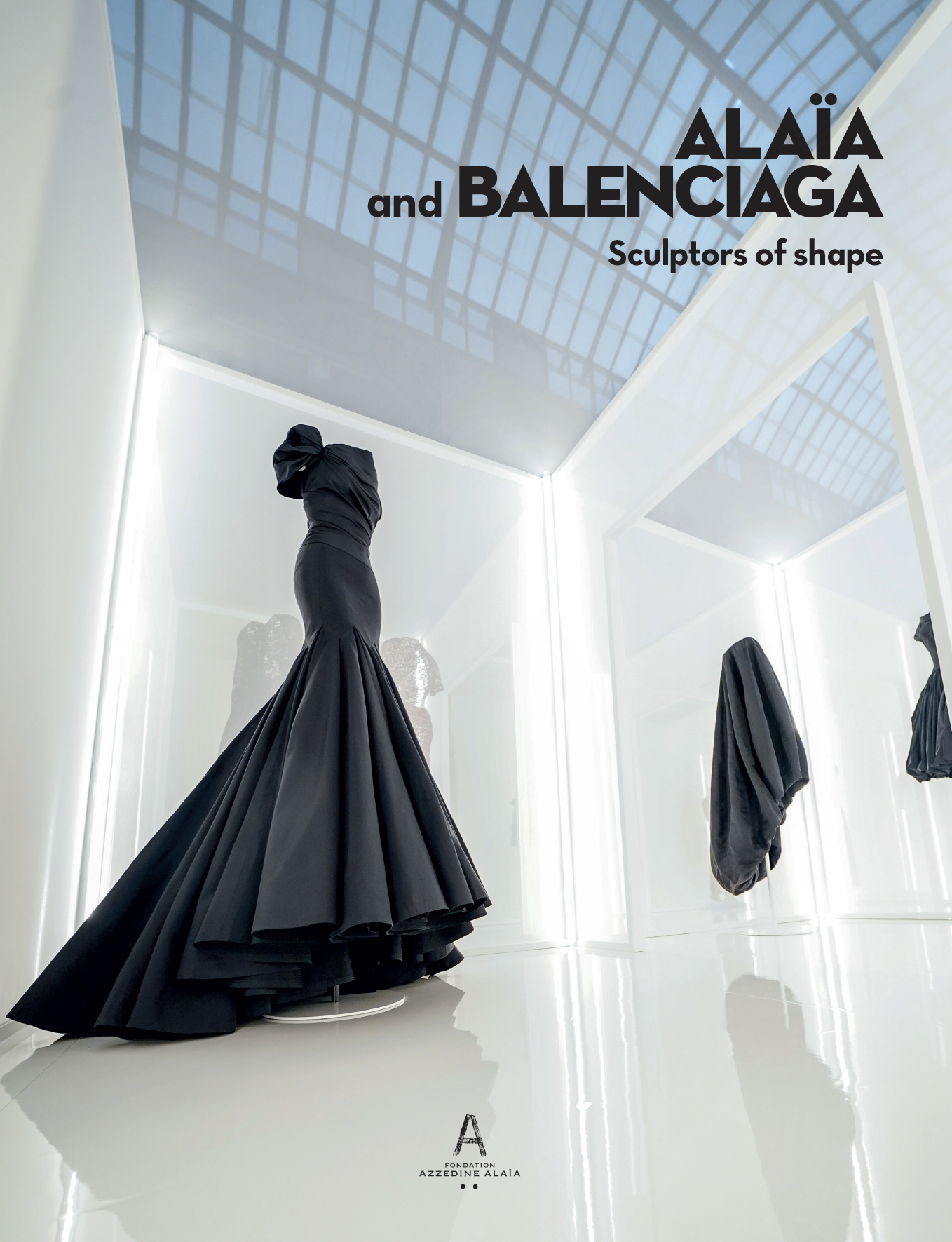 This original catalogue presents an analysis of the works of Alaïa and Balenciaga as well as more historical texts concerning the lives and career paths of the two great couturiers.

AZZEDINE ALAÏA, AN OTHER WAY TO LOOK AT FASHION 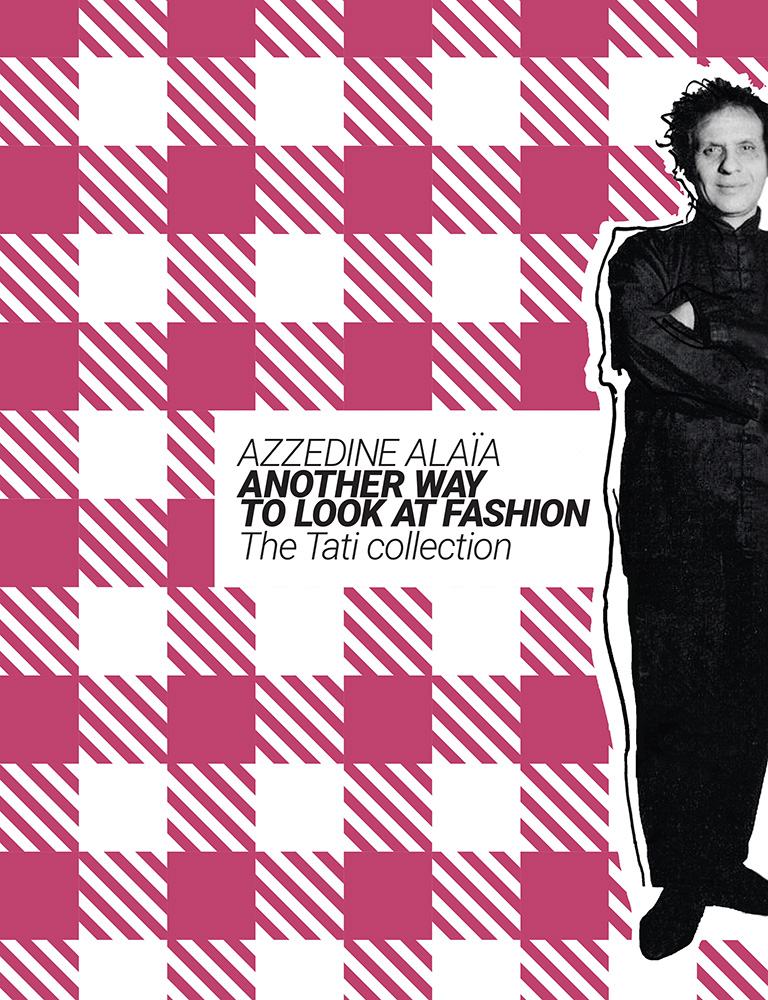 Another way to look at fashion : the Tati Collection exhibition catalogue - published in 2019 by fondation azzedine alaïa, edited by carla sozzani

The couturier had effectively created a collected in the emblematic pink and white Vichy check awning canvas of the popular low price store in Barbès. The Alaïa-Tati print collection is now considered to be a major realization in fashion history.

The art of tailoring 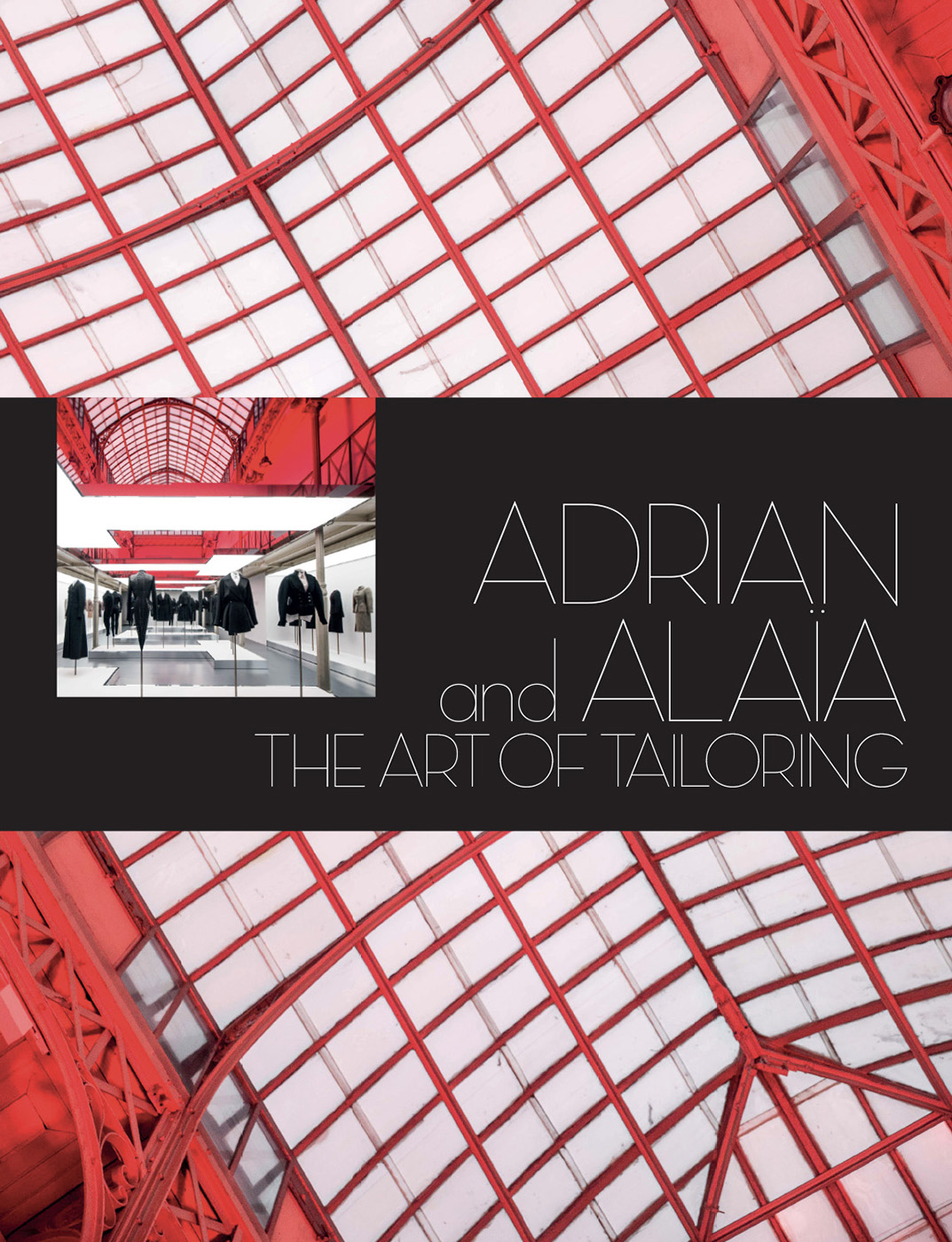 adrian and alaïa : the art of tailoring exhibition catalogue - published in 2020 by association azzedine alaïa

For the first time the designs of Azzedine Alaïa converse with those of Gilbert Adrian.
Legendary American couturier, Gilbert Adrian was the costume director for Metro Goldwyn Mayer in Hollywood during the ‘golden age’ of cinema of the 1930’s. His work became synonymous with Hollywood glamour.
This exhibition shows how the taste for timeless elegance, the quest for a certain style before fashion, the perfection of cut, can be passed on from one great couturier to another though separated by decades and continents. 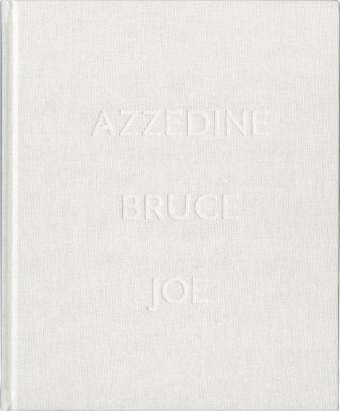 The friendship of Azzedine, Bruce, and Joe goes back to the early 1980’s, along with many stories and photographs found in this book. The collection of pictures is an homage to Azzedine made by friends that Azzedine admired and to whom he was very close.

The book, conceived as a cherished project of Azzedine in 2017, is the story of time and friendship between three people who loved and admired each other. Few months after his death, Bruce and Joe dedicate it to this friendship and their abiding love for Azzedine. 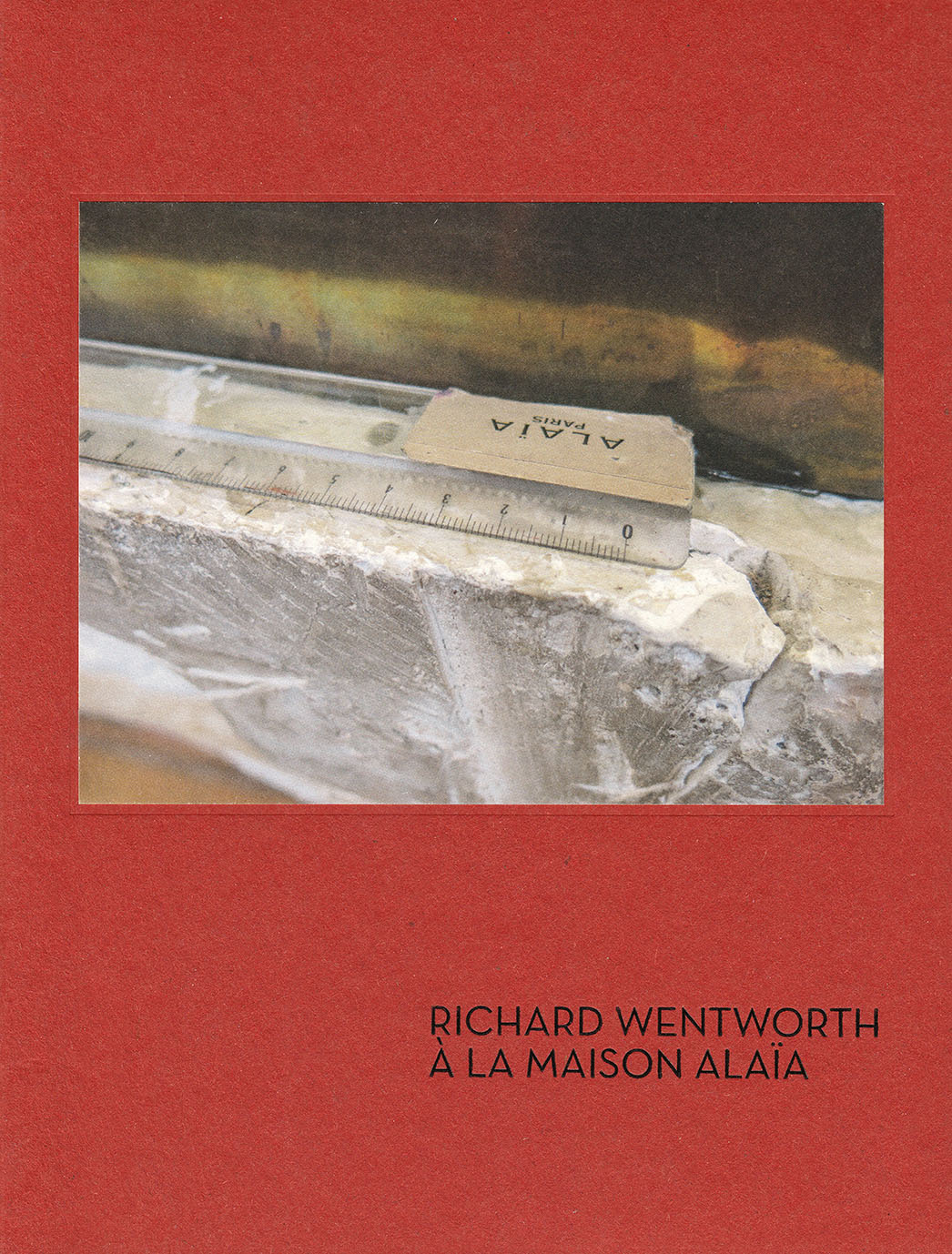 For three years Richard Wentworth follow Azzedine Alaïa in his studio and in the Alaïa house. With discretion he knew how to immortalize the life of this couture house and give a new and very personal vision, a kind of mapping of this immense space in the Marais and the world of the couturier.

“Sewing is not just a medium : it’s a world to read and write, that Richard Wentworth, with Azzedine Alaïa, invites us to discover.” Donatien Grau 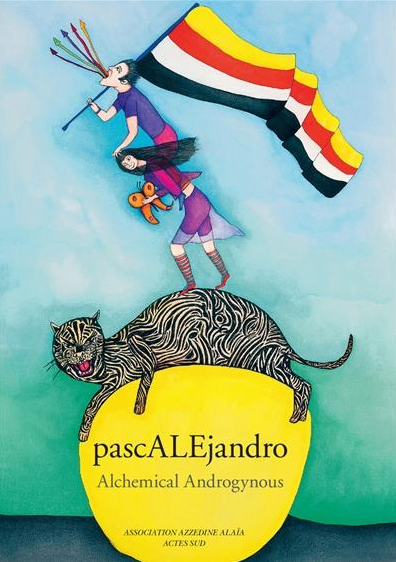 Pascalejandro is an artist in his own right, the result of the close collaboration between Alejandro Jodorowsky (the line) and Pascale Montandon-Jodorowsky (the color).
Extending the exhibition edited by Azzedine Alaïa, this catalogue brings together for the first time all of his work. In the course of the pages we will discover a vivacious work, traversed by mythical, metaphysical references.

BETWEEN ART AND FASHION 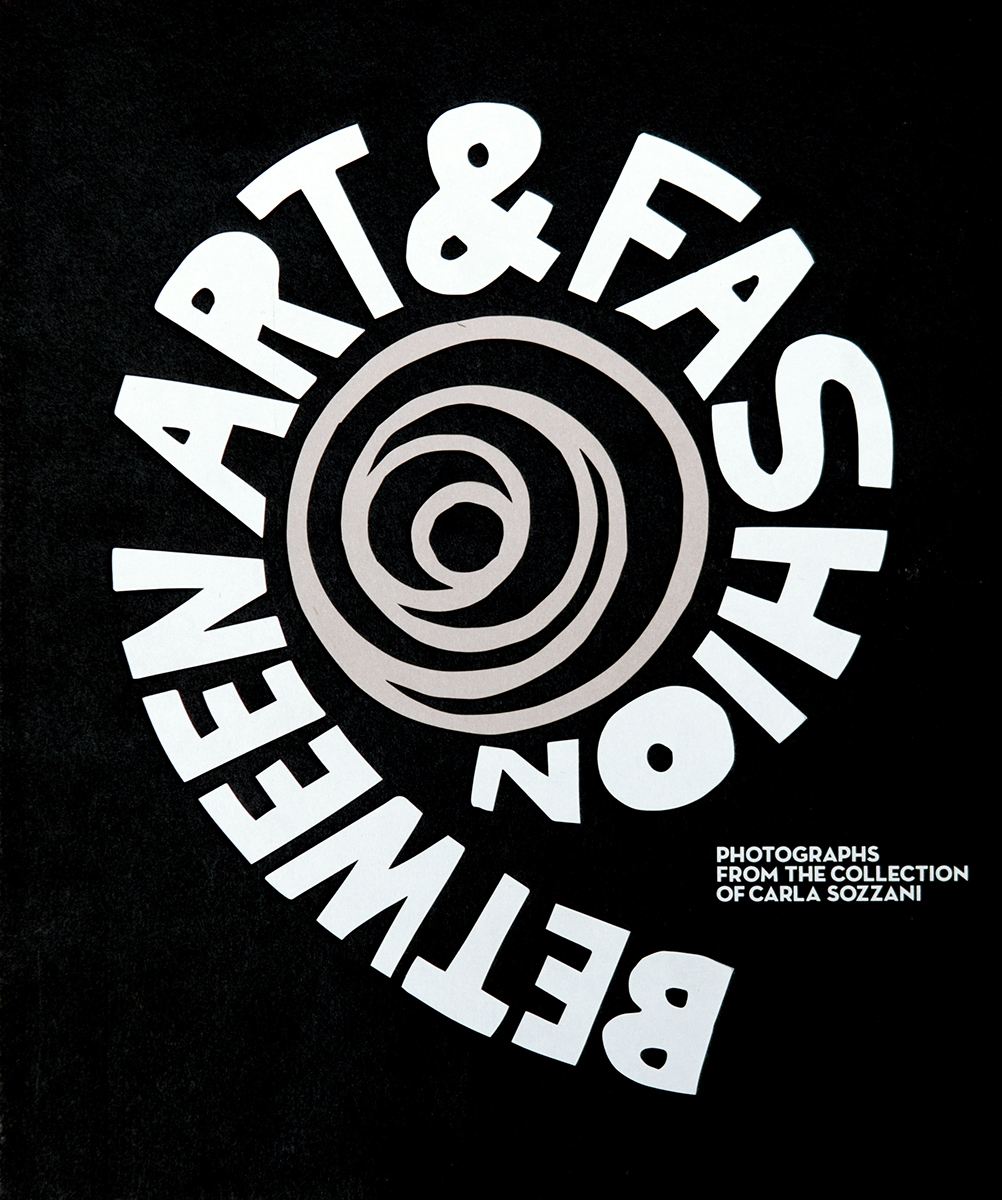 Between art & fashion, photographs from the collection of Carla Sozzani exhibition catalogue - published in 2016 by association azzedine alaïa and carla sozzani editore

The exhibition «Between Art and Fashion» at the Azzedine Alaïa gallery, presents for the first time nearly 200 photos from the Carla Sozzani collection and selected by Fabrice Hergott. Photographs from the 19th century to the present day, from Man Ray to Helmut Newton, from Moholo-Nagy to Francesca Woodman, from Daido Moriyama to Alfred Stiegliz:a vision of the world, of woman, of beauty.

With more than 350 pages in uncoated paper, the book features the reproductions of all the pictures, a foreword by Azzedine Alaïa, a conversation led by Fabrice Hergott with Carla Sozzani, and seven essays by some of international contemporary critics and scholars like Barbara Carnevali, Germano Celant, Emanuele Coccia, William A. Erwing, Donatien Grau and Jean Louis Scheffer. 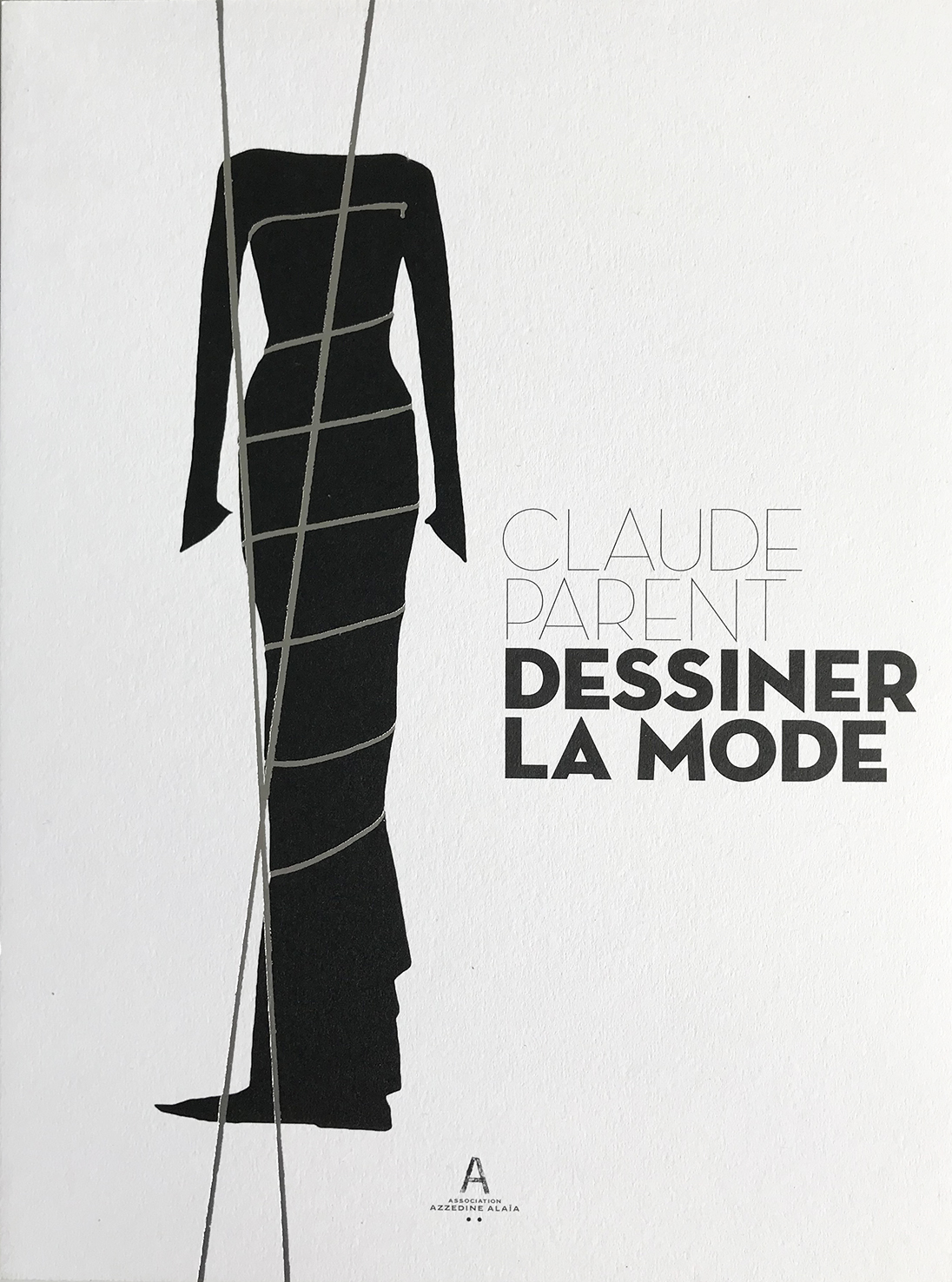 It is a little-known fact that the legendary architect began his career as a fashion illustrator.

From the summer of 2015 to February 2016, Claude Parent had undertaken a series of fashion drawings inspired by the creations of Azzedine Alaïa ; these ink drawings, reworked with his grandson Laszlo Parent, are traced over by a silver line which highlights the forgotten oblique dynamic of the garment, are each an attempt to understand an art that he considered to be not far removed from his own – an art of living. 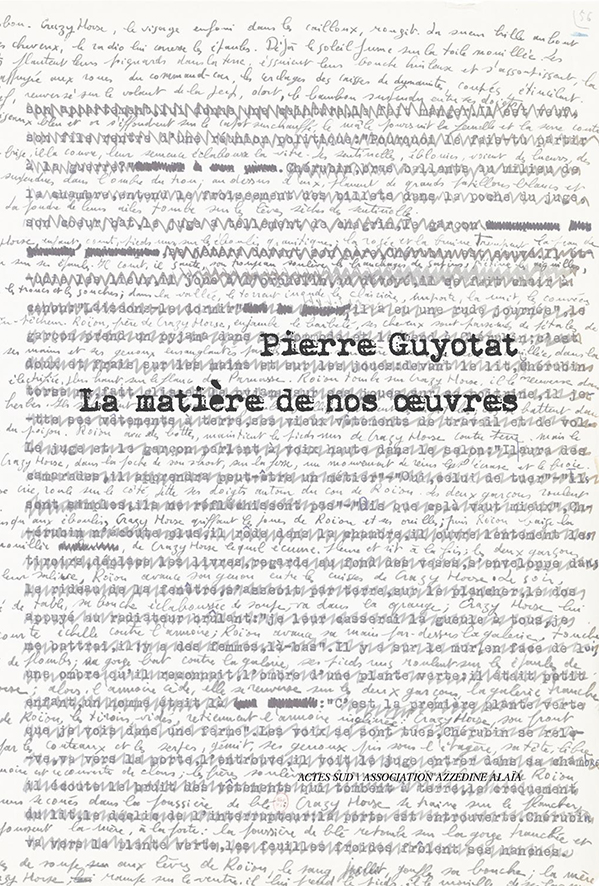 Under the direction of Donatien Grau, this catalogue dedicated to the eponymous exhibition of 2016 at the Azzedine Alaïa gallery is the result of a major collaboration with the National Library of France, where the Pierre Guyotat archives are kept.

This book testifies to a fertile dialogue between the texts of the writer Pierre Guyotat and the works of artists such as Miquel Barceló, Paul McCarthy or Jean-Luc Moulène.
Book and exhibition have thus made it possible for the first time to highlight the extraordinary source that the work of this author represents for French and international artists. 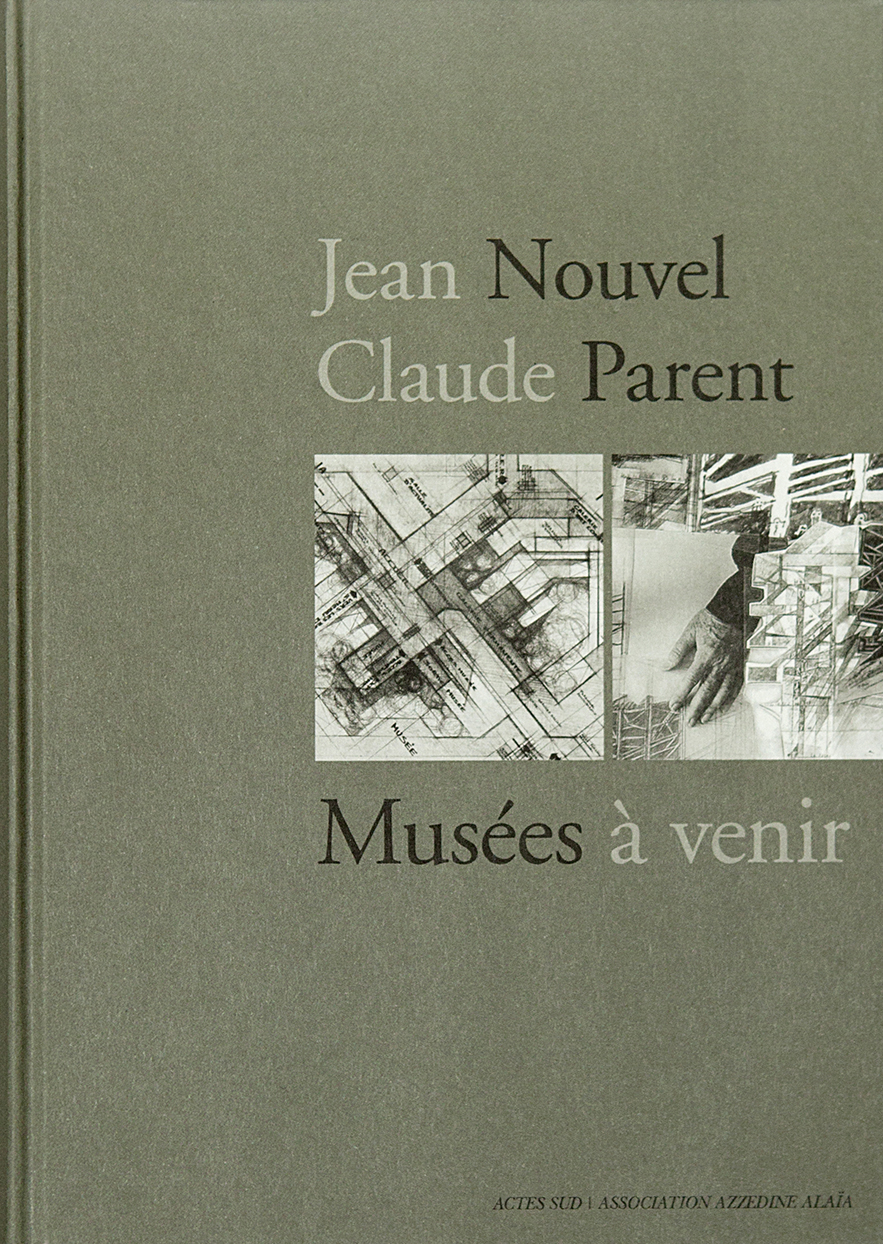 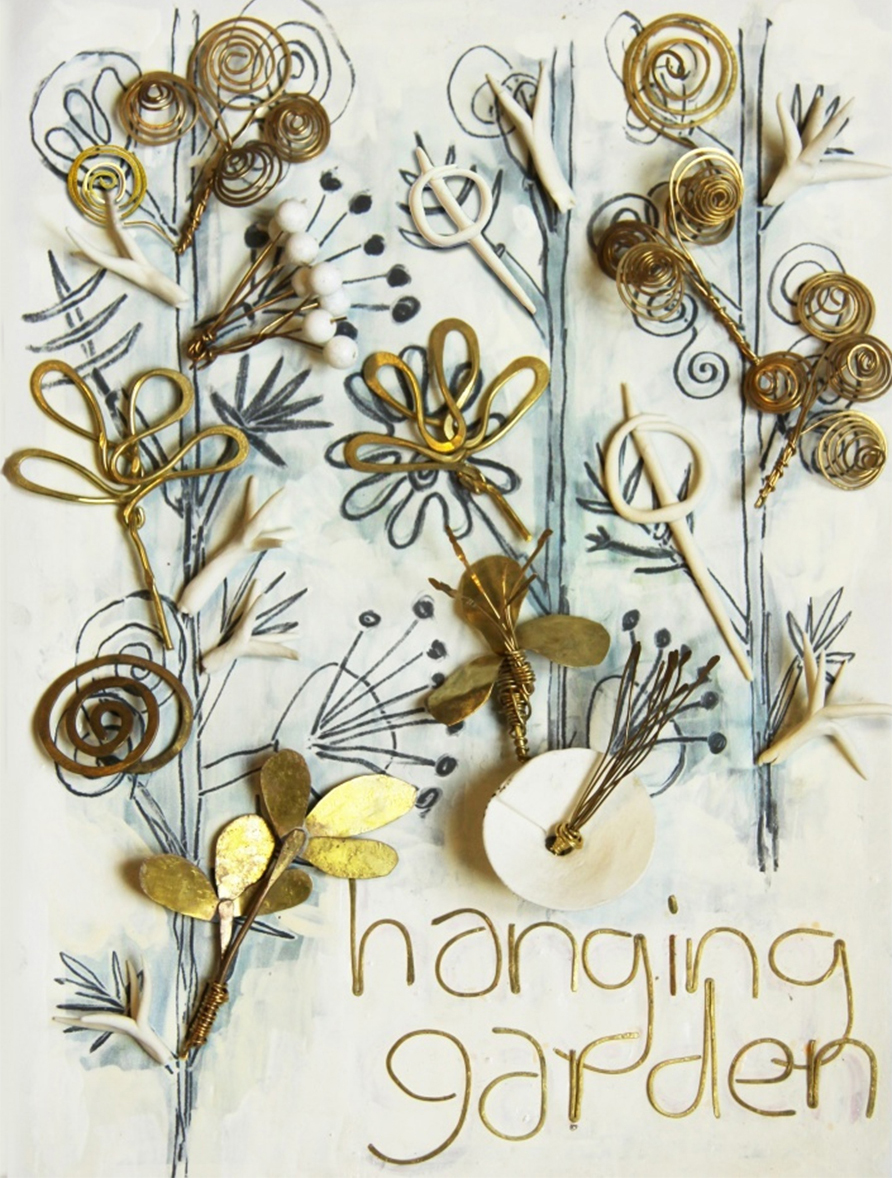 With “Hanging Garden”, Kris Ruhs presents a holistic installation of some forty-five thousand pieces of porcelaine and copper, all made by hand.

The catalogue, published by the Azzedine Alaïa Foundation and Carla Sozzani Editore, includes numerous views of the installation, a conversation with the artist, and a critical essay by Donatien Grau. 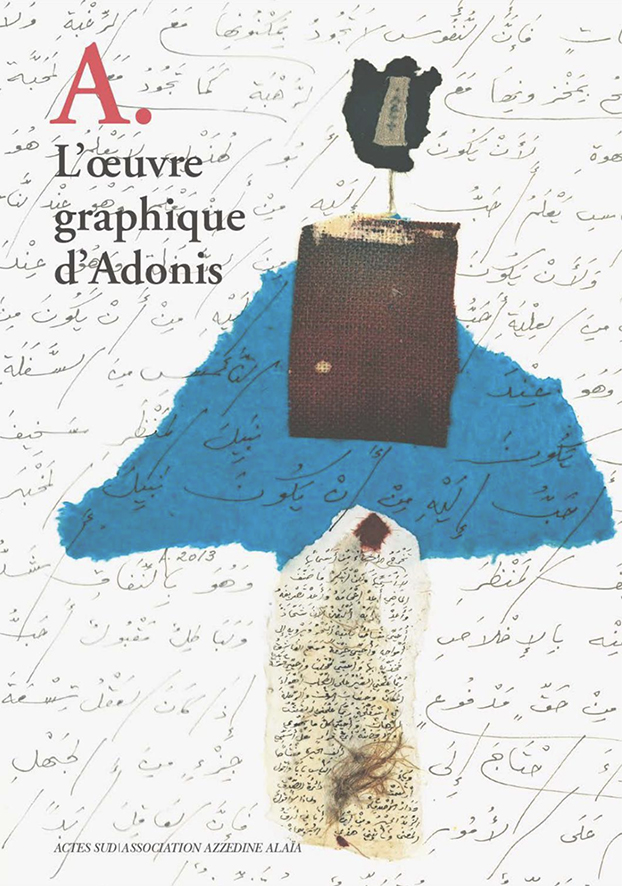 This book invites the reader to enter into the secret of the creation of Adonis, one of the greatest living poets:the visual work. Since the late 1990s, the poet has brought collages, calligraphy and objects to the world. The exhibition traces nearly twenty years of creation with eighty illustrations and texts to explain and accompany:a long conversation of Adonis with Azzedine Alaïa and the artist Adel Abdessemed exposes the universe of forms that inhabits the poet,critical essays put this work into perspective.

This catalogue, published on the occasion of an exhibition organized by Azzedine Alaïa, is the first of the couturier with Actes Sud. 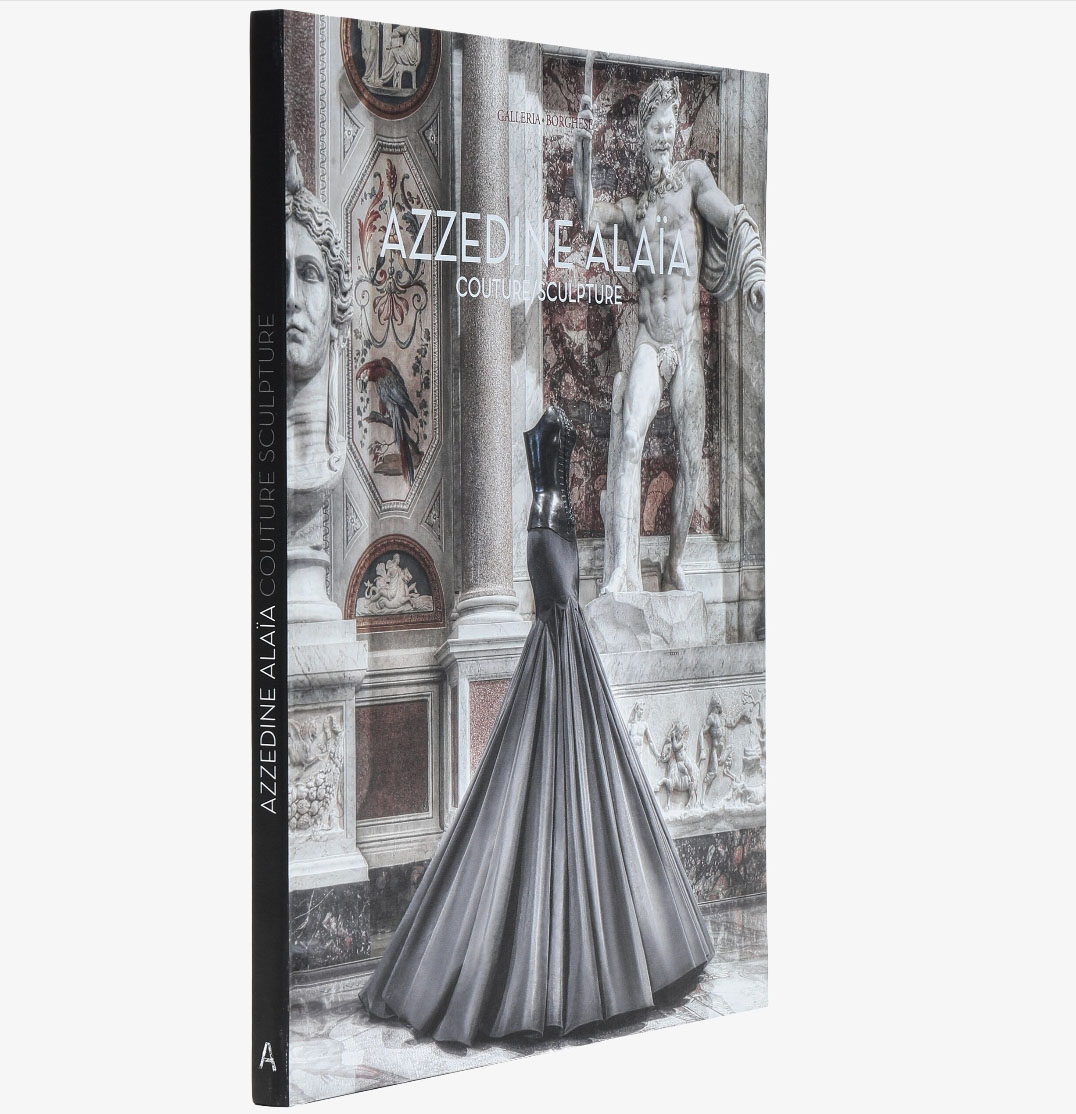 The exhibition “couture/sculpture” offers a dialogue between the “flexible sculptures” of the great couturier Azzedine Alaïa and the Greco-Roman-inspired sculptures that are exhibited in the gallery of the Borghese villa.
The sensuality of feminine haute couture is exposed in the midst of the naked bodies of Bernini and other prestigious sculptors. 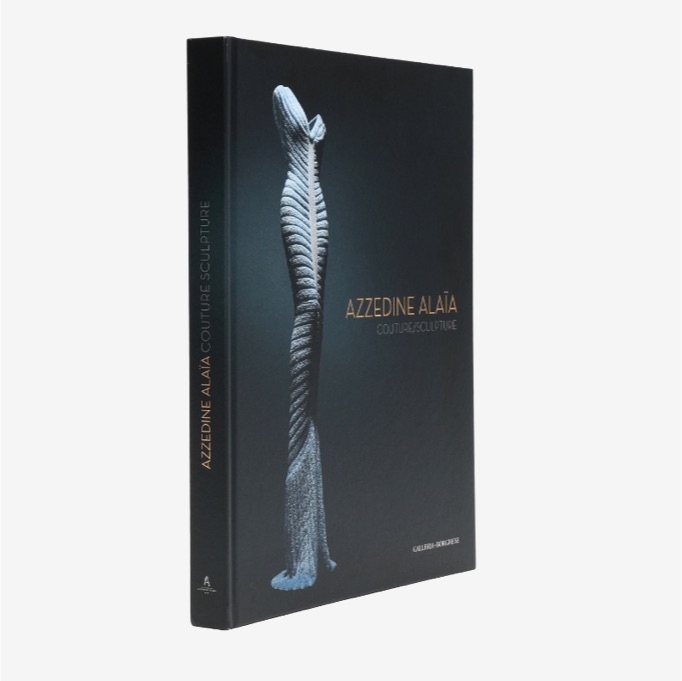 Azzedine Alaïa’s creations are exhibited at the Galleria Borghese among the masterpieces of great Renaissance masters such as Bernini, Titian and Caravaggio.